» Blog » The majestic Palace of the Grand Master or Kastello

Posted on: Authentic Rhodes | Rhodes Attractions | Rhodes History | Things to do in Rhodes

The Palace of the Grand Master (Kastello or Palazzo) is undoubtedly an emblematic work of gothic architecture in Greece and a landmark for the medieval town of Rhodes.
The building, with its imposing dimensions, dominates the highest point on the northwest side of the castle, where the Knights’ Street ends.
It occupies the site of an ancient temple of the Sun god of the ancient acropolis.

The Byzantines founded the Palace at the end of the 7th century AD, which was the citadel of the Fortress.
After the conquest of Rhodes in 1309, the Knights of the Order of Saint John or the Knights Hospitaller reconstructed it, in order to become the official residence of the Grand Master of their order.
Apart from the palace, however, it was also the administrative center of the state of Knights and a fortress. Its strong fortification often provided protection to the local population during the successive invasions of the numerous enemies, who wanted to occupy the island.  It is noteworthy that when the Turks invaded Rhodes in 1522, Kastello remained almost intact, thanks to its excellent construction.
The Palace of the Grand Master was able to withstand almost all enemy attacks. However, it fell into decline during the Turkish occupation (1522-1912), when the conquerors turned it into a prison and later allowed it to be razed.
But history made it even worse. In 1865 Kastello was almost completely destroyed, due to the explosion of a gunpowder storage room located in the basement of the adjacent church of St. John. Only the entrance towers were left standing.
The Palace gained new glory when, during the Italian occupation of the Dodecanese (1912-1948), the Italian Commander Cesare Maria De Vecchi decided to rebuild it on the basis of original plans they had found. So, they managed to turn it into the official residence of the Italian Governor. Furthermore, the Italian King Vittorio Emmanuel III and later Benito Mussolini used it as a summer palace. The Palace of the Grand Master is a rectangular building with dimensions 80×75 meters. It has a very large inner courtyard, in which statues of the Hellenistic and Roman period adorn it.
The building is structured on three levels.
On the ground floor there were utility rooms, kitchens, storerooms and stables.Today there are 2 permanent exhibitions hosted:
1)  Exhibition entitled “Ancient Rhodes – 2400 years” (inaugurated in 1993), which covers the period from the founding of the city to Roman rule. Here you can admire various findings from excavations. So you can see weapons, ceramics, sling projectiles, household utensils, Rhodian amphorae, a clay head of the Sun god, offerings from the sanctuary of Demetra, etc.
2) Exhibition entitled “Rhodes from the Early Christian Period to its Conquest by the Turks (1522)”. Here you will see exhibits related to the evolution of the city of Rhodes and the daily life of its inhabitants since the 4th century. A.D. to the beginning of the Ottoman period.
Upstairs, you can admire the Grand Council Room and the Dining Room of the Knights. On the same floor are the personal apartments of the Grand Master known as the “Daisies” (“Margarites”).
Mosaics from the Late Hellenistic, Roman and Early Christian times are laid on the floor. Italians brought them from Kos, to decorate the palace. Of particular interest are the waiting rooms, reception, music, dance and mosaic hall of “Medusa”, as well as furniture dating from the 15th to the 19th century. 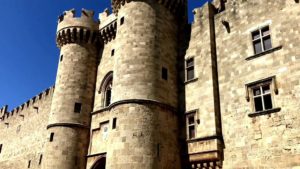 The Grand Master’s Palace functions as a museum.
The exhibits are presented in thematic unities:
– First Christian and Early Christian times – Paganistic religions and Christianity. Development of Rhodes town, density and extent of medieval monuments on the island. Sound theater.
– Economy. Agriculture, handicraft, trade, import products, monetary movement.
– Everyday life. Nutrition, clothing, leisure and entertainment, social care. Burial customs and cemeteries.
– Defense and administration. Weapons and defense organization, state and ecclesiastical administration.
– Spiritual life. Inscriptions, manuscripts.
– Worship items, pictures.
– Architectural members from Christian temples, frescoes and mosaics.
It is truly one of the most important medieval monuments in the world and of course the most important attraction of Rhodes. 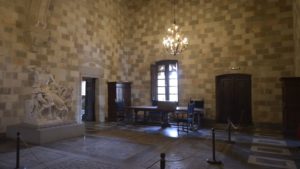