Posted on: Authentic Rhodes | Rhodes Attractions | Rhodes History | Things to do in Rhodes 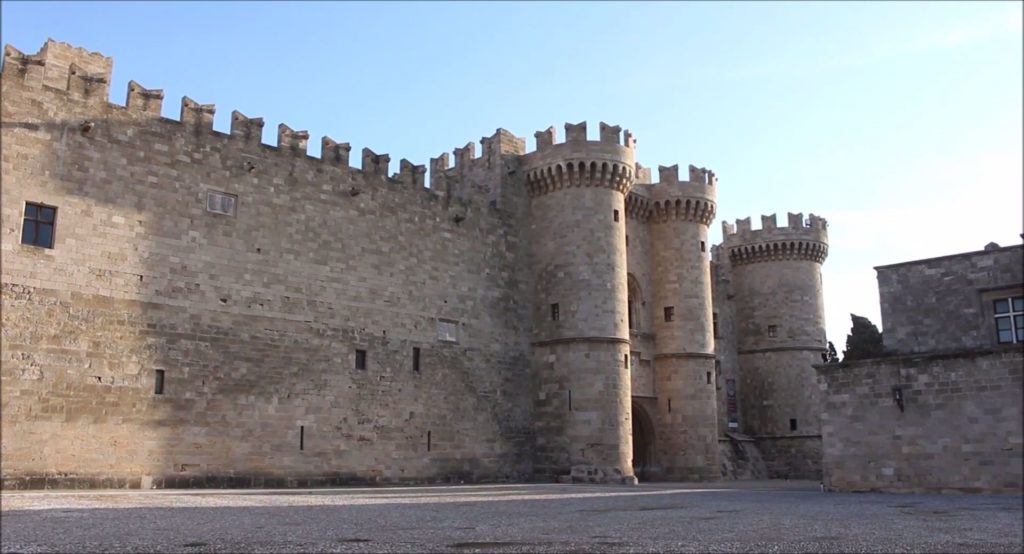 The castles of the island of Rhodes are a network of forts, built by the Knights of Rhodes to protect the population and resist long sieges.
They succeeded in this purpose, because the Ottomans never managed to seize these castles.
The Knights Hospitaller abandoned the castles after an agreement that allowed them to leave Rhodes, taking with them their weapons and their possessions.
The castles of Rhodes were created over many centuries. Some of them are built on ancient fortress sites, while others are Byzantine-era creations. Of course, the Knights Hospitaller buttressed, supplemented or built from scratch the most of these.
The castles of Rhodes, in addition to protecting the island and its inhabitants, served as observatories and as administrative stations. It is worth renting a car and visiting these. They will really impress you. Here are the top 5 castles.

Palace of the Grand Master of the Knights of Rhodes

The Palace of the Grand Master of the Knights of Rhodes, also called “Kastello”, is a castle inside the castle, in the old town of Rhodes. It was the administrative center of the Knights and the residence of each Master.
Kastello’s current state owes to the Italian conquerors of Rhodes. They rebuilt it, since it was almost destroyed during the Turkish occupation.
In place of the palace in antiquity, there was the lower Acropolis of Rhodes and a temple dedicated to the sun god.
Today the castle of the Grand Master functions as a museum. It is one of the most important medieval monuments in the world and of course the most important attraction of Rhodes. You will find it at the end of the Knights Road. 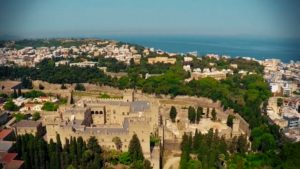 The fortress or small castle of Agios Nikolaos is another stronghold of the island. It is located in the port of Mandraki, in the city of Rhodes.
The Knights of Rhodes built it to strengthen the island’s defense.The sieges of many years and the earthquake of 1841 damaged the castle.The Grand Master Pierre d’Aubusson repaired and reinforced it, giving its final form.
Already in the middle of the 17th century, a lighthouse operated on the fortress. In 1863, a new traditional stone lighthouse replaced the old.

The castle of Monolithos

Monolithos Castle is perhaps the most impressive of Rhodes, with spectacular view to the sea. It is set on a 236-meter-high rock, above a valley, near the village of Monolithos in southwest Rhodes.
The Grand Master D’Aubusson built it in 1476, on the ruins of an earlier Byzantine fortification. Enemies never occupied the castle, due to its extremely strong position. The Knights were forced to abandon it during the great siege of 1522, in order to strengthen the defense of the city of Rhodes.
The view from the castle to the village is magnificent. Also the sunset from there is wonderful. The interior of the castle is approximately circular, and there are traces of buildings and tanks. There is also a well-preserved chapel dedicated to Saint Panteleimon. 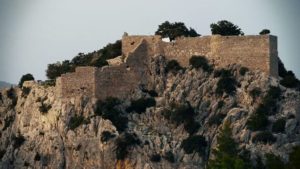 The castle of Asclepios

To the east of the island, above the village of Asklepios, lies the homonymous Knight castle. It is at an altitude of about 250 meters, in a strategic post with stunning views.
The Knights built the castle in the 15th century, initially the square tower and then the northwest corner tower. They used it to protect the village and oversee a large part of the beach and inland.
Outside the castle there are loopholes and an additional wall about 1.5 meters thick. Its masonry is impressive. Inside the fortification there are tanks and remnants of other buildings

The medieval castle of Kritinias is located two kilometers northwest of Kritinia village, at an altitude of 160 meters. It is almost fifty-five kilometers far away from the town of Rhodes. The route to the castle is spectacular, and the view to the Aegean Sea will fully compensate you.
The castle is a blend of Byzantine and Medieval style, and is also known as “Kastellos”.Its erection dates back to the Orsini era, in the years 1467-1476. The ruins of St. Paul’s Catholic Church are inside to it. You will also see newer buildings, because the castle was used as a naval base during the Italian occupation. 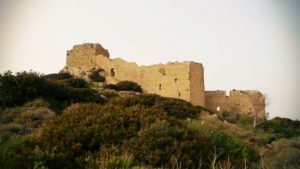